Have you joined Holben’s Rewards? Earn points for every dollar you spend on our site, plus bonuses for signing up and following us on social media. It’s easy! Learn more here.

An original Haveston product design, the Service Dial Coaster series features a selection of the most iconic vintage military watch dial designs, revered by collectors for their history, aesthetic and service.

Constructed from detailed heat-resistant silicone, each 4mm-thick, 90mm-diameter coaster closely conveys the character of its namesake design, and serves perfectly as a soft landing for your timepiece or beverage.

“Fab Four” 924-330 - 1973
Commissioned by the U.K. MOD in the 1970s, it utilized a readily available commercial ETA-7733 Chronograph movement and was illuminated by tritium paint. Departing from previous Lemania-powered monopusher movements, the dual pushers allowed stop and resume of elapsed time.

A-7 Aerial Navigation - 1935
Commissioned for the US Army Airforce in the 1930s, the A-7 monopusher chronograph had a huge 49mm case with a deliberately 40-degrees-offset, non-illuminated dial for easier reading while holding the flying yoke.

Trench - 1918
With distinctive WWI radium-illuminated “Gothic” style numerals, chronographs of this era were often found in monopusher pocket watch form. For efficient legibility, Roman numerals were being phased out in preference of Arabic, with black enamel dials for higher contrast.

Airforce Tri-Compax - 1944
A dual-pusher, radium-illuminated chronograph, mainly issued to aircrews. Unlike most bi-compax chronographs of the period, the addition of a third subsidiary register allowed the recording of elapsed time beyond an hour. A now-familiar and optimum stage of chronograph dial design.

I was very impressed with the level of detail and the intricacies of the moldings. I highly recommend them. 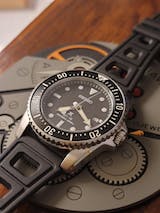 Unique Coaster set with my favorite style watch face. Made with easy to clean flexible material.

I was very impressed with the level of detail and the intricacies of the moldings. I highly recommend them.

Unique Coaster set with my favorite style watch face. Made with easy to clean flexible material.