We are OPEN with fast, FREE shipping in the United States. We ship internationally!

This is the second Cinturini straps over the last 10 years. For the right watch they look great. They do not get grungy dirty on the wrist like other synthetic straps do. They are easy to clean and have a nice vanilla scent.
I have an eight inch wrist and it fits comfortably. There are two holes left to make it larger and 5 holes to make it shorter.
Highly recommended. 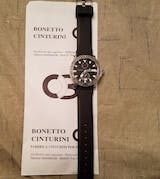 Great strap, lives up to BC's outstanding reputation. Love the matte finish, matches the dial and bezel of the watch I attached it to perfectly.

Good band with 2 issues. First, the adjustment holes are too far apart to allow for specific comfort levels. Second, it is really hard to take off because of the VERY deep s curve on the buckle. All this said, I like it and it looks good on my LG Urbane.

I have a Love/Hate relationship with this watch band. I LOVE the feel, texture, and vanilla smell to the band. However, you should know that, as other have suggested in these reviews, it is really hard to take off because of the VERY deep s curve on the buckle. Okay, so let's say you can forgive this issue...I did. But what I really HATE is that within a year (8 months or so), a tear began to appear in the band right by the hole where I attached the buckle (see pics). When I contacted Holbens, they said they sell thousands of these bands and there has never been a problem, so I figured it was just a fluke. I sent the band back to Holben's and they sent me a new one. After about 10 months or so (just under a year), the same thing happened and another tear appeared. I was frustrated, to say the least. I kept the band until it eventually broke. Then I ordered (and paid for) another band (I know, shame on me). This time I took extra special care putting it on and removing it but as the pics show, the tear occurred once again. So this time I am giving up on the band. Bonetto Cinturini needs to fix/adapt the buckle to make the band easier to put on and take off. Maybe this is what causes a weakening in the rubberized strap. Five stars for the look, feel and smell...but one star for the weird buckle design and ultimate tearing of the material which renders the strap unusable.

J
J.
Beautiful on the Tag Heuer Monaco but...

This strap looked great on my Tag Heuer Monaco (black face). I bought it as a replacement for the original alligator skin strap, which doesn't survive wetness very much. The clean edges of this strap complements the boxy and edgy style of the square-shaped Monaco. It's good for all around use, i.e. dressy, casual or active. You'd think it was originally meant for my watch. It doesn't show much wear after a while, and stays looking good. One complaint though is that it's quite cumbersome to put on and remove from your wrist as the material is a bit stiff.