We are OPEN with fast, free shipping in the United States. We ship internationally!

This is absolutely the softest leather band I have ever owned! Looks great on my Vaer diver! I would definitely recommend the Di-Modell Pilot Black Watch Strap! 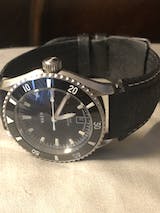 Very nice product. The brown is quite a bit darker (seems black in low light, but I was ok with this).

Had an initial issue with them sending me the wrong size because the band was mislabeled somewhere along the way (received 20mm and needed 22mm). I contacted them and had a conversation with Mike regarding the issue. After a couple of back and forth emails, Mike offered to overnight a new band and send me a shipping envelope for the incorrect band. Our emails were prompt and he was very nice and professional during our conversation.

I just received the new band and everything is all good with this one.

I have a Samsung Gear S3 Classic and the band itself is really nice. It's thick and widens to match the watch (These are hard to find aside from the band that comes with the Gear S3 Frontier itself). If you're looking for a leather band, this one's it.

It's literally my favorite. I've used the same styled leather on 4 watches now. And now it's on my latest and greatest... Only thing I'd suggest to Di-Modell would be to "integrate" the strap into the lugs (like on the oem omega rubber strap). So like a curved ended strap with extra padding, plus the notch of course 👌. Only option I've found for that idea was for me to order a custom strap that takes 2 months to get to me and would cost ~$500. I'll take this for a 1/10 of that price since they need to be replaced yearly anyways. Please someone from Holben's, ask to get that made! 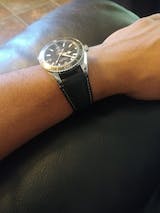 Very high quality strap that's been treated with some type of waterproofing. No worries about accidentally getting this strap wet. I went into a hot shower with it twice not realizing I had not removed my watch. No ill effects. Towel dried the watch and it still looked like new. I would not recommend intentionally showering with this strap on because I believe all leather will eventually succumb to water but it's good to know that this strap can survive limited water abuse.